Jinmay is a supporting character, and later a main character in Super Robot Monkey Team Hyper Force Go!. She serves as Chiro's main love interest over the course of the series. She is a robot who the Skeleton King found abandoned in deep space and attempted to use to kill Chiro and destroy the Hyperforce.

Jinmay does not spend much time with the main cast, only appearing on occasion until eventually being inducted as an honorary member of the Hyperforce, and even then, her number of starring roles is notably lacking in comparison to her peers. 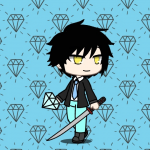